Growler craze to debut in Statesboro 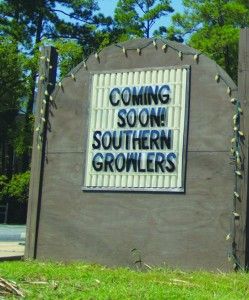 Southern Growlers will be Statesboro's first exclusive growler fill-up station. The shop will open up sometime within the next month.Photo by: Andy Morales

An old drinking tradition arrives in Statesboro as Southern Growlers brings an alternative way to carry your favorite craft beer while keeping it fresh.

A growler is a ceramic or glass jug, typically filled with draft beer, in a variety of sizes that can seal freshness in for weeks.

Southern Growlers is expected to open near the end of the month at the site of the former Kbob Kelly’s, across the street from Gnat’s Landing.

Growlers are a growing commodity in response to higher demand and popularity for convenient access to local craft beers. Growler “fill-up stations” are popping up in liquor and wine shops, gas stations and even some grocery stores.

“I’m a big beer fan,” David said. “It’s a concept I’ve been looking at for awhile, we wanted to create a craft beer niche here.”

“We wanted to have somewhere that would give people a more craft-beer kind of experience. We want to try and stick to regional brewers, locally we will have products from Eagle Creek and Southbound,” David said.

Growlers offer an alternative to conventional beer containers because they are reusable and allow customers to experience more local beers without having to visit the brewery.

Customers will pay an initial $5.99 fee for the container, any size, and can trade up or down whenever they want.

“Once people come for the first time and figure out how to do it, they’ll love it,” David said.

There will always be at least 20 different beers on tap as well craft soda and cider available.

“Really, we’re going to listen to our customers. We want to keep what they want on tap,” David said.

Growlers also offer customers the option to take their favorite beers home that may only be available on tap.

David said, “We want to engage an educate the community about craft beers. We’re hoping to hold events with brewers and get them to teach folks a little bit more about their beers.”