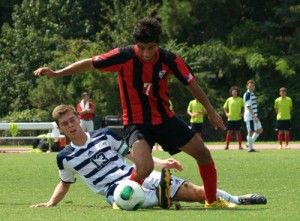 The Georgia Southern University men’s soccer team hosted Gardner-Webb University and bounced back with a win this afternoon.

The Eagles found themselves down early when Denzel Clarke gave the Runnin’ Bulldogs a 1-0 lead in the 13th minute.

The Eagles found a quick equalizer when senior forward Witt Carlisle found sophomore forward Eric Dinka in the 36th minute to level the score at 1-1.

The two teams went into the locker room knotted up at 1-1.  In the 63rd minute freshman forward Jeremy Rector gave the Eagles the boost they needed when he found the back of the net for the first time this season.

GSU survived a late attack from the Runnin’ Bulldogs and held on to win its first game of the season 2-1.

GSU improved its record to 1-1 and begins a five game road trip starting in Durham, North Carolina against the Duke University Blue Devils on Sept. 10.