Eagles dominate Bash In The Boro 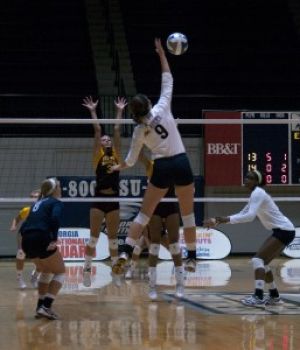 The Georgia Southern University volleyball team (12-2) was firing on all cylinders at the Bash In The ‘Boro over the weekend.

The Eagles thoroughly defeated all three of the opponents they faced.

Friday night, the Eagles faced off against Central Michigan University (6-6) in front of a crowd 400 strong.

Senior outside hitter Nicole Jeschelnik used the crowd to fuel her offense, smashing down 13 kills. Junior outside hitter Jamie DeRatt, recording 11 kills and nine digs, gave an outstanding performance for the Eagles. CMU could simply not keep up, and lost three sets in a row.

DeRatt was pleased with the team’s performance.

“I think we were really calm and collected, and everyone worked together, took care of their jobs and everything just fell into place,” DeRatt said.

At noon on Saturday, the Eagles took on Jackson State University (1-14) and continued to display their talents on the court.

Eagle sophomore outside hitter Christina Vereb came off the bench and led the offensive onslaught against JSU, slamming in 15 kills and five digs. Sophomore right side Katie Bange demonstrated her offensive ability, with nine kills of her own.

It wasn’t all offense for the Eagles. Sophomore libero Alexandra Beecher and freshman setter Kelly Scott combined for 13 digs, taking down Jackson State in three sets.

Vereb believed her team came out and executed its game plan.

“We were just trying to focus on (ourselves) this game, and executing what we know how to do,” Vereb said.

Saturday night offered the last game of the weekend for the Eagles, who were challenged by Charleston Southern University (5-9). DeRatt did not disappoint, racking up 20 kills and six digs by the end of the night. Jeschelnik showed up ready to play yet again, adding nine kills and nine digs.

The Eagles trounced Charleston Southern as they did their last two opponents, three sets in a row.

“These were statement games. We were looking to go out this weekend and make a statement before heading into conference play,” Wood said.

The Eagles certainly made their statement of dominance this weekend. They will look for their seventh win in a row when they open up conference play on Friday against Elon University at 6 p.m. in the Hanner Fieldhouse.