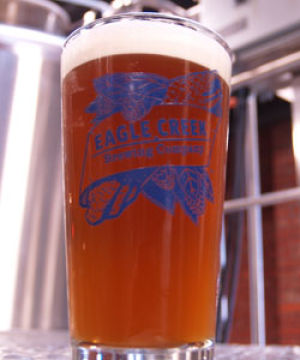 Eagle Creek Brewing Company is establishing itself across Georgia, with 42 locations carrying its crafted brews in areas like Statesboro, Savannah, St. Simons Island and Brunswick.

The beers available will vary and the company plans to release different brews year round, brew master Cole Brown said.

4/5 Low Country Pale: The Low County Pale Ale is Eagle Creek’s flagship beer. For those of you that haven’t tried this already released brew, it is a classic pale ale that features a combination of three varieties of American hops that are bombarded with grapefruit and pine flavors. Not everyone likes hoppy beer, but if you do, this brew is sure to please, with similarities to Sweetwater 420 in “hoppiness” but a much smoother finish.

5/5 Grass Roots Lemon Lime Hefeweizen: Hefeweizen is a German-style wheat beer and this brew is Eagle Creek’s spin on it. Most of its beer styles are based off German beer and the brewery even has a water filtration system to mimic the water used in distilleries in Germany.  The beer is brewed with white wheat and fruity hops and combined with all-natural limeade. The closest beer on the market in similarity may be Leinenkugel’s Summer Shandy, but the all-natural limeade sets it apart. The combination of the lemon-lime flavors and bready finish from the wheat makes this brew a potential fan-favorite and an exceptionally refreshing beer that is suitable year round. The uniqueness combined with the execution of the beer makes this brew exceptional.

4.5/5 Spot Tail Light Blonde Ale: Blonde ales are typically a balanced beer that is light bodied and can be lager-like. Eagle Creek’s Spot Tail Light Blonde Ale is similar to other light beers on the market. This ale is intended for students because it is a light drinking beer that is even lighter on the wallet. This beer is especially good for a hot Statesboro day as it is light on the stomach and is infused with citrus flavor from the hops. Overall it’s a good, clean beer.

Within the next two weeks the brewery will be open for two hours a day for tours and tasting. Patrons will receive four 3 oz. samples for free and merchandise will be available for purchase. The price for the tour is yet to be determined.

Spot Tail Light Blonde Ale’s release is expected within the next month and Grass Roots Lemon Lime Hefeweizen within the next six weeks. Low Country Pale Ale is already available at several locations in Statesboro and elsewhere.

Potential beers coming from Eagle Creek include a Russian Imperial Stout named Puff’s Magic Dragon Imperial Stout, with an alcohol content of 14 percent, and a praline beer that will feature brown sugar and pecan flavors.