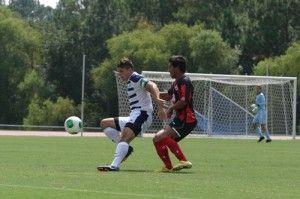 The Georgia Southern University men’s soccer team opened up the 2013 soccer season by hosting the Southern Conference/Big South Challenge finishing with a record of 1-1.

GSU split the duo of games falling to the Winthrop University Eagles by a score of 2-1 on Friday and prevailing by the same margin on Sunday against the Gardner-Webb University Runnin’ Bulldogs.

WU relied heavily on its upperclassmen as senior midfielder Adriano Negri gave WU the advantage with a second half two-goal performance.

Negri scored in the opening moments of the second half to break the standstill and less than a quarter-hour later found himself in position to put WU ahead after a rebounded ball was able to find his boot to put WU ahead 2-0.

With time running out, the home side was looking to find a spark to give the crowd of over 400 at Eagle Field some hope. In the 89th minute senior forward Witt Carlisle connected after a cross from fellow senior defender Thomas Valikonis to cut the lead in half and temporarily give GSU life.

However, time ran out and GSU did not provide the result it wanted to open the season.

Sunday, GSU bounced back to put its record to 1-1, and ended the weekend on a high note.

Similar to Friday’s game, GSU allowed its opponent to score first and was behind the ball early when WU junior forward Denzel Clark headed the ball from the penalty box after sophomore forward Ali Al-Gashamy crossed it in from the edge of the box.

GSU did not panic and held its composure as it countered five minutes later with an equalizer of its own by way of sophomore forward Eric Dinka, via a cross from Carlisle.

Both teams went into the locker rooms tied at one apiece until GSU pulled ahead in the 63rd minute when freshman forward Jeremy Rector beat his man and found the back of the net.

GSU was able to record its first victory of the season and will look to continue its run as they embark on a five-game road trip beginning against Atlantic Coast Conference opponent Duke University next Tuesday.