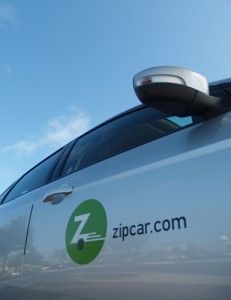 ZipCars feature more advanced technology than an average car such as touchscreen interface and locking the door through an app.Photo by: Andy Morales

This year, Georgia Southern University is teaming up with ZipCar to offer students, faculty and staff another option of transportation.

Last year GSU offered students the ability to use WeCar, by Entreprise Rent-A-Car, as a car sharing service. Since then, the university has switched to ZipCar.

“In comparison to WeCar, it’s a much better service in my opinion,” Charles Glover, vice president of auxiliary affairs in the Student Government Association, said.

GSU was the first university or business in 2011 to offer this kind of service to students and faculty in the state, according to a news release.

The vehicles themselves feature more advanced technology than the average car. In some cars, the dashboard has a touchscreen interface. Students can reserve cars on the mobile app, and students can lock the car door and blow the horn through the app.

For security purposes, each car must have the keys inside it at all times but a keycard is used to start the engine, Glover said.

Student members will have access to cars 24/7, the vehicles being right on campus, and reservations can be made online. GSU students pay $25 for membership and gain $40 worth of credit during the promotional period, which ends in October.

The rates range from $8.25 per hour and $70 for a day, which also includes gas and insurance. Members must be at least 18 years of age in order to use the service, according the ZipCar website.

Benefits of ZipCar for the university include reducing the strain on parking, access to fuel-efficient vehicles and reducing the carbon footprint produced by a large number of vehicles, according to the website.

“Using the service is much cheaper than owning a car, for gas and insurance purposes,” Glover said.

Having this kind of service will be helpful for freshman, Glover said.

“The only thing I feel that people wouldn’t use it if they want to go home or something for the weekend. I don’t know if they want to pay $8.25 an hour for that,” Loweres said.

Being a freshman without a car, Glover found finding a ride to places such as Wal-Mart a hassle.

With a service like ZipCar in place, Glover believes that freshmen especially will find this transportation option useful and convenient.

“All of it is taken care of for you,” Glover said.

Javil Downer, freshman computer science major, said, “If I didn’t have a car I probably wouldn’t use the service right now, but later down the road I would.”