Volleyball to hit up Jaguar Invitational 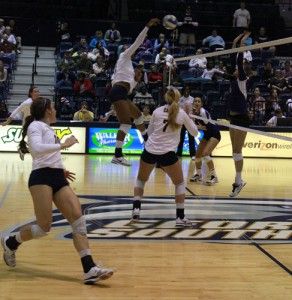 Georgia Southern University’s volleyball team will open its season this weekend at the Jaguar Invitational in Mobile, Ala. where it will face Southern Utah University, Tennessee State University and the University of South Alabama.

GSU will start off the season against SUU at 5 p.m. on Friday and will play TSU and South Alabama on Saturday at 10 a.m. and 7 p.m.

The Eagles finished 25-7 overall, and 15-1 in the conference last year.  They won the Southern Conference South Division title and have been picked second in the annual SoCon Preseason Coaches’ poll this year.

The SUU Thunderbirds finished their season last year tied for seventh in the Big Sky Conference and had an overall record of 12-20 and conference record of 8-12.

TSU was picked third this season in the East Division of the Ohio Valley Conference preseason coaches’ poll, and finished with an 18-14 overall record and a 10-6 conference record.

The South Alabama Jaguars were picked eighth in the Sun Belt preseason coaches’ poll, and finished their season with a 13-17 overall record and a 6-9 mark in the Sun Belt Conference.

The Eagles will be starting the season off with new head coach Dustin Wood. Coach Wood was an assistant at George Mason University for three seasons, and prior to that he spent six seasons coaching at his alma mater, East Stroudsburg University.

Beecher gained another title during the preseason when she and junior middle Kym Coley were named preseason All-Conference.

The Eagles have a total of 30 games this season, which includes 15 home games.