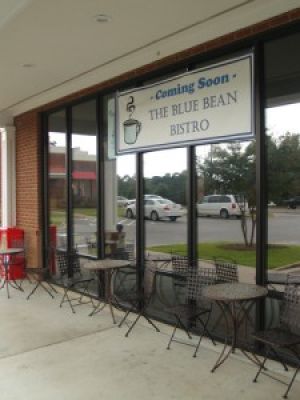 One of the first of its kind in Statesboro, The Blue Bean Bistro, located within walking distance of campus, will be open for business on Labor Day weekend.

After spending many years in the food and beverage industry, Jody Cason and Kas Burris have teamed up to open up a one-of-a-kind bistro in hopes of providing a new hang-out spot for Georgia Southern University students and Statesboro locals alike.

“There is no other place in town that serves our combos. It’s a coffee house but we also plan on serving beer and wine,” Cason said.

Cason, a 1999 graduate of Georgia Southern with a degree in hotel and restaurant management, opened the bistro with Burris after opening the Steak and Shake in Statesboro in 2012.

“After seeing all of these food and beverage establishments do well, especially in Statesboro which we consider the world’s largest small town, we decided it was time for us to venture out and open up our own business,” Cason said.

Cason describes The Blue Bean Bistro as an extension of your office, your apartment, or your dorm room.

“We want to be a place where you can come hang out and listen to good music,” Cason said.

“The sunshine panini is going to be a really good one. We also have a pastry chef on board to have in-house, chef’s choice desserts made every day,” Cason said.

According to Cason, Kass will be in the kitchen cooking up seasonal dishes that will pair well with beer and wine. For the coffee lovers that want to come in and grab lunch they will have salads and paninis as well.

Cason says that they are open to suggestions if anybody has ideas for dishes they would like to see on the menu.

“We don’t want to be a franchise store where we can only serve a certain thing.  We can do whatever, we’re flexible,” Cason said.

Alongside many other teas and drinks, Juva is one of the roasts that they offer that is very high in antioxidants. They will offer Kilimanjaro, French roast and decaf for just a few base flavors but will rotate others out as seasonal flavors, Cason said.

“Currently we are just sampling and giving out menus,” Cason said.

“We are not just a mainstream coffee shop,” Burris says. “We’ve been doing little test runs and samples throughout the week because we aren’t fully set up yet. However it is more than a coffee shop, there is a little bit of everything.”

According to Cason, the bistro will also offer a drive-thru service.

“I’m an alumnus and I’m a part of Eagle Nation,” Cason said. “Obviously we’ve got East Georgia and Ogeechee Tech down the road from us but my favorite is right across the street. We’re trying to keep Eagle Nation going.”