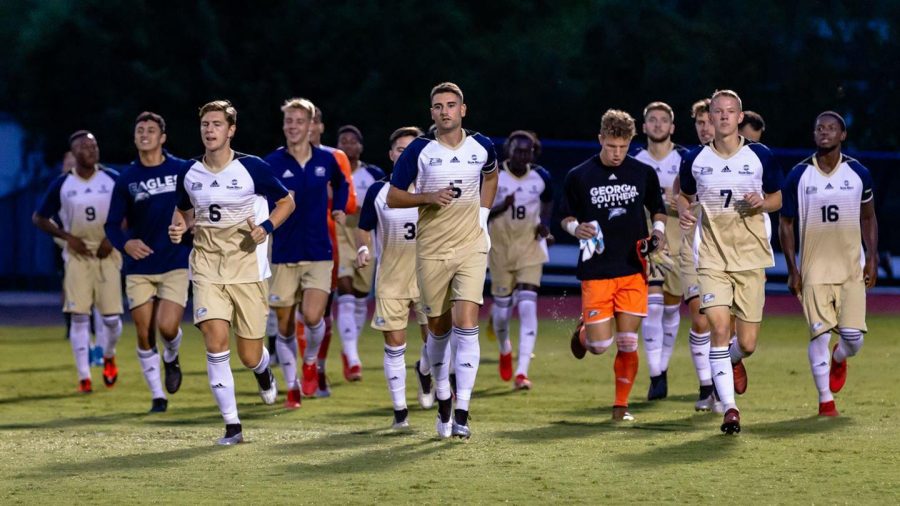 The team says goodbye to six seniors after Wednesday's loss to Georgia State in the first round of the Sun Belt Championship.

The Georgia Southern men’s soccer team fell to rival Georgia State on Wednesday in the first round of the Sun Belt Championship.

“We’re disappointed in the way we ended the season,” Head Coach John Murphy said. “But I want to thank our six seniors for everything they’ve done during their time with us…These seniors have left the program in a better place and for that, we will always be grateful.”

Coming off of a 4-0 loss against Coastal Carolina in the last regular season game, Head Coach John Murphy admitted that the team would need to rely on roster depth in order to be successful in the tournament.

The team travelled to Boone for another rematch of last season’s Sun Belt Championship where they fell 4-0 in a very cold environment. While GS just defeated State in the team’s matchup earlier in the season, they were not able to keep the momentum going in their postseason efforts.

GS was unable to get on the board in the game, despite eight shot attempts. The team was led by junior midfielder Alhaji Tambadu who had three shots and one on goal.

State took an early lead by scoring a goal in minute 24 by beating the defender to the right side of the goal. They held this one point lead into halftime.

Fifteen minutes into the second half, the Panthers increased the lead to two with a goal from sophomore midfielder Matthew Fearnley. Two more back-to-back goals sealed the victory for State, with another punching through the right side of the net.

GS sophomore goalkeeper Jose Eduardo Bomfim notched seven saves in the game but State outshot the team 14-8. The Panther defense held the GS offense to just one shot on goal.

The team finished the season 7-9-2 overall and 2-3 in the conference. Next season, there will be seven returning starters.