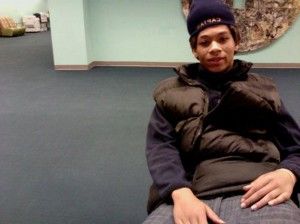 Former GSU student Caleb Clemmons pled guilty to terroristic threats via computer on Aug. 20. He was given 5 years probation.Photo courtesy of: kingaffejoffer.tumblr.com

Clemmons received five years probation and six months in jail. The six months that he spent in prison since his arrest will be credited toward his sentencing, according to documents received from Bulloch County Criminal Court.

During the probation period, Clemmons is forbidden from using social media, drugs and alcohol.

Clemmons was also sentenced to 150 – 180 days in a detention center, however this can be suspended if he complies with completing a mental health evaluation as well as a drug and alcohol evaluation.

Clemmons has also been banished from Bulloch, Effingham, Jenkins and Screven counties.

On May 6, Clemmons was officially charged with one count of terroristic threat via computer, according to the criminal court documents.

Students were officially notified of Clemmons’ threat on March 14 via a message from the Dean of Students Office.

“We got an email, an anonymous email, that said someone had seen a posting on the blogging site Tumblr, and that there was a threatening message about ‘shooting up’ Georgia Southern University,” Chief Michael Russell, director of public safety, said.

Authorities then searched Clemmons’ residence but found no weapons or any signs of a plan or plot to attack, Russell said.

Clemmons posted the threat to Tumblr on Feb. 7 and was arrested and taken into custody on Feb. 8, according to the criminal court documents and the GSU Public Safety Report.

Clemmons told authorities that he made the post as a joke to see how long it would take him to be arrested, which only took around three hours, Russell said.

Although students had been notified in March, the message said that the threat had been resolved in early February.

“I felt in order to answer any questions about a perceived threat or a fear of a threat, I needed to let students know we had resolved the issue,” Patrice Jackson, dean of students, said.

On March 5, Clemmons was granted bail set at $20,000, provided he comply with the following terms: no alcohol, drugs or weapons of any kind, a mental health evaluation and only release to a close relative, according to the criminal court documents.

Clemmons was unable to make bail and remained in the Bulloch County Jail, which caused controversy as the case went viral.

Lauren Gorla and Shelby Farmer contributed to this article