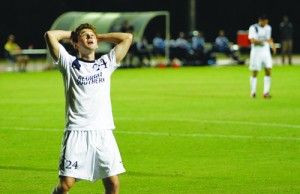 The Georgia Southern University men’s soccer team finished off its preseason in a bittersweet way as it fell to the University of Central Florida by a score of 4-3.

The Eagle offense came together in the final tune up before the regular season, more so for senior forward Witt Carlisle, who scored all three of the GSU goals.

While the offense came together, the defense fell apart. Right out of the gate the Eagles conceded a goal off a penalty kick in the fourth minute to go down 1-0.

GSU responded in the 28th minute with Carlisle scoring off a shot that deflected off the goalie and found the back of the net to pull the Eagles level with the Knights.

GSU once again found itself behind; as halftime was approaching they conceded a second goal off of a header to head into the break down 2-1.

The momentum continued to be on the Knight’s side as GSU conceded a third goal minutes into the second half to put GSU down 3-1.

The Eagles offense began to pick it up later in the half as Carlisle found the net for a second time that day in the 70th minute when sophomore defender Reed Norton built up the run and led Carlisle with a pass that the senior finished, cutting the lead down to 3-2.

The goal in the 70th minute changed the tempo and momentum of the game, as 12 minutes later Carlisle put away a third goal from just inside the box to bring the Eagles level for the second time.

Despite Carlisle’s performance the Eagles fell behind at 4-3 only three minutes later when UCF had a free kick from 20 yards away that was deflected in.

There are two takeaways from this game despite the loss, such as GSU being able to score three goals and also the fact that the game does not go against its record.

The Eagles will continue to tweak and figure out their lineups. They will have a full week of practice before their first game of the season on Friday, as they are hosting the Southern Conference/Big South Challenge.