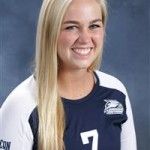 Van Dyke, the all-time GSU assists leader and 2012 Southern Conference player of the year, has signed a contract with Laon Volley Club in Laon, France.

Van Dyke was somewhat hesitant at first about living in another country.

“I’ve only been out of the country once, when we went to Costa Rica last summer as a volleyball team. It’ll definitely be a new experience, but I feel like moving down here for college has helped me get used to living in a new place,” Van Dyke said.

With the U.S. lacking post-collegiate volleyball outside of the Olympics, it is common for U.S. players to relocate to continue their playing careers.

Similarly to soccer, volleyball players in Europe are cultivated through well-developed youth programs and a well-established professional national league.