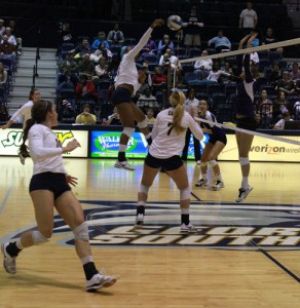 The Georgia Southern University volleyball team defeated Southern Utah University on Friday evening, 3-0 in its season opener at the Jaguar Invitational in Mobile, Ala.

The Eagles led in the first set 7-2 and maintained a four or five-point working margin until a Schofield kill and a ball handling error on the Eagles part, but Minnerly set DeRatt for a kill to end the set.

GSU will play again tomorrow when they face Tennessee State University at 10 a.m. and the University of South Alabama at 7 p.m.