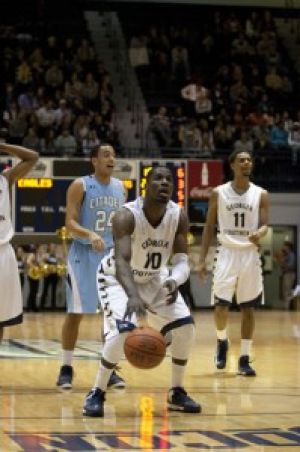 Prospective members of the Georgia Southern University men’s basketball team came out to showcase themselves and possibly make the team yesterday at walk-on tryouts.

In his first season at GSU, head coach Mark Byington is trying to build the foundation of a solid program by focusing on character as well as skill.

Making the team does not guarantee playing time, so Byington wants players that can contribute with intangibles as they try to earn more minutes.

“Sometimes people have the wrong expectations about coming in and playing a lot of minutes and whatever else, but they have to come in and help out where it’s needed,” Byington said.

Byington is not certain how many spots are up for grabs but if he recognizes the combination of skills and the intangibles he is looking for he will take notice.

As a new coach, Byington has to mesh with new players coming in. He will look to the returning players for help in that process.

“I think our new players are understanding how we are going to play along with the guys who are returning. I’m new to everybody, whether it’s a guy that was recently brought in or has been here for a couple years,” Byington said.

The new players are catching on to the spacing system Byington wants to run, but the veterans are going to be key in execution on the court.

“We are going to lean on the experience of Tre Bussey, Jelani Hewitt and Marvin Baynham.  Those three are older guys that have kind of been through it,” Byington said.

A closely-knit locker room can help a team withstand the ups and downs of a tough season, so Byington wants everyone on the roster to feel like an important part of the team.

Byington said, “We’re just going to keep building and adding; like I told everybody, I don’t have new and old guys, you’re all my guys.”