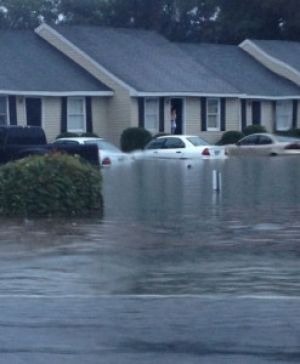 The recent heavy rainfall has created immense amounts of stagnant water across campus and University Police are urging students to defend themselves against the possible dangers by planning now.

“Worry about it now and think about it now.  If you think and practice, you’ll react quicker and better,” Michael Russell, chief of University Police, said.

Students need to plan where the safest location would be and what supplies they need with them while they wait out the severe weather.  Russell suggests moving to higher ground to ride out the storm.

Drivers need to be especially careful because water can cause a car to stall and stop, or even be carried away by the high waters.

Low-lying areas can be especially dangerous because these areas end up holding large amounts of water that can overflow into roads and block roadways.

“Don’t drive through rushing water because you can’t always see if the road is underneath it.  Water is very powerful and it can wash away cars,” Russell said.

If a student’s car stalls while driving on the roadway, the driver first needs to assess whether or not it is safe to exit the vehicle.  If not, the best bet is to stay put and wait until assistance comes to help, Russell said.

The rainfall was so severe on Monday night that the Bulloch County chapter of the Red Cross opened a station for displaced victims due to flooding.

“When we have a number of people that have been affected by disaster, it makes more sense to open up a shelter where we can make some meals in larger quantity in a large space.  We have case workers at the station to help them get back on track with things like replacing Social Security cards,” Mary Roche, disaster services specialist for the Bulloch County Red Cross chapter, said.

“We’re always prepared for the worst.  We’re assuming tonight (Tuesday) it will flood out again so we’re already rounding up volunteers to run the station,” Roche said.

The Red Cross also sent a Disaster Assessment Team to Statesboro to look at the possible damage on West Johnson Street and the apartments on Fair Road, Roche said.

The team has been trained in assessing the damage by taking pictures and speaking to the owners of damaged buildings.

According to the Red Cross website, “On-call DAT volunteers travel together to the disaster site, assess the scope of the disaster, and if necessary, work with the victims to identify and meet the immediate needs of the displaced residents.”