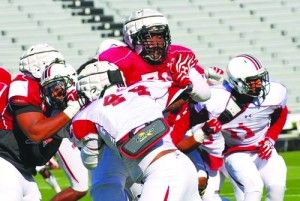 The Guardian cap is a soft, padded material on the helmet developed by the Hanson Group. Georgia Southern University was featured on NBC for using Head Impact Telemetry System (HITS) technology.Photo courtesy by: Michelle Grant

With the threat of concussions looming in football, many teams, Georgia Southern University included, are looking for new ways to help better protect their student-athletes from symptoms of head injuries.

The Hanson Group, a technology and material sciences group located in Alpharetta, created the Guardian Cap, a soft, padded cover that can be worn over the player’s existing helmet to absorb much of the energy from a hit to the head.

“We want to lessen the impact of each and every blow as much as possible. We are of the belief that if you can reduce the impact, the sound waves of the collision, and increase the amount of time the two objects come to a full stop, you can keep the athletes safer in both the immediate and long-term timetables,” Matt Simonds, The Hanson Group’s national sales director, said.

Another important aspect of a football helmet is not hindering the athlete’s field of vision or range of motion.

“With movement, the athlete should be able to perform all range of motion movements he can perform with a standard helmet. There is a possibility that it could block vision if the opponent (most likely D-Line and O-Line blocking) pulls the back of Guardian up and over the front of the helmet in order to block vision. For the Guardian to transition over to game use, we may have to add an element in the rear to disable this possibility,” Simonds said.

The Hanson Group is continuing to find ways to improve the design and appeal of the Guardian Cap.

“With a revamped design, we would have a goal of making it as durable as possible while still remaining pliable, soft and effective. We would also strive to make it customizable with team colors and logos.  We would also want it to have more curb appeal and be something younger athletes think looks good, increasing their willingness and desire to use the product,” Simonds said.