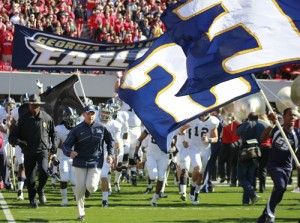 This season's football tickets will be distributed on a first come first serve basis and it has caused a variety of reactions from students.File photo

There has been mixed reaction from the Georgia Southern University students to the changing of the student ticket policy for the 2013 season.

Tickets for football games are now on a first-come-first-serve basis. If you don’t get a ticket early, you might miss the game.

This is not a new policy to GSU students. Some of the spring baseball series in 2013 saw this as well, against teams like the University of Georgia and the Georgia Institute of Technology.

Some students are reluctant to the change in policy and feel that there is no need for it.

“It’s ridiculous. A student I.D. should be enough to get into the games,” James Mullins, a sophomore sports management major, said. “All it’s going to do is make less people go to the games.”

The other side of the coin is that there are other students that are alright with the change in policy.

“It doesn’t sound like a big deal,” Trevor Lind, a senior construction management major, said. “The tickets are still free and going to pick them up isn’t a major thing.”

Across campus, the many different reactions to the change in student ticket policy are widespread. Many dislike the change, some are all right or indifferent about it, but there are also some students that view the policy from both sides of the coin.

“I’m not a huge fan of it because I like just being able to walk in by the swipe of a card, but at the same time it is understandable in this time of construction,” Nick Nolan, a junior economics major, said. “Being able to have a ticket and being able to know ahead of time that you’re going to the game is a good feeling.”