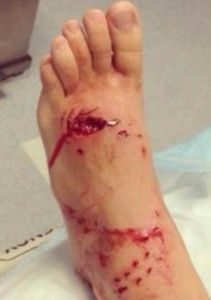 A Georgia Southern University student was released from a Florida hospital on Monday, July 1 where she was being treated for a shark bite.

Colleen Malone, a sophomore early childhood education major, was visiting Jacksonville Beach on June 25 when she was bitten on the foot by a shark.

Malone is not sure exactly what shark it was because she did not get a good look at it.

“Our best guess is a Bull Shark and I think it was maybe three feet long,” Malone said.

Malone has been contacted by sources to study exactly what shark bit her.

“These shark specialists from the University of Florida got ahold of me and they want to check and see what shark it was,” Malone said.

When a fin popped up Malone began to swim away, she said. She saw the round nose of the shark but was not sure if she had been bitten.

“When it bit my foot it just felt like a tug, and while I was swimming away I thought it missed me,” Malone said. “I was kind of in shock.”

Malone swam to shore to get medical attention.

“When I got to shore and saw just how bad it was, it started hurting really bad,” Malone said. “I almost passed out.”

She was treated at Baptist Medical Center in Jacksonville, Fl. from June 27 to July 1.

“Because of all the bacteria in their saliva, I was at a very high risk for infection, “Malone said.

The bite was not devastating and Malone is in good condition after receiving medical treatment.

“I have a pretty okay attitude about it,” Malone said. “I know the possibilities of it happening again are extremely low now that it actually happened.”

Other students that visit Jacksonville Beach are hesitant to get back in the water.

“The memory of being preyed on by a shark would be too overwhelming for me to get back in the water,” Abigail Ormsby, sophomore public relations major, said.

“I think it would be easy to never get back in the ocean after a shark attack, but I think we as people grow and become stronger when we choose not to take the easy way out of things,” Perry McWilliams, sophomore middle grades education major, said.

This will not stop Malone from getting in the ocean again, however.

She said, “I probably won’t go very deep, but I will definitely get back in.“

Cydney Long contributed to this report.