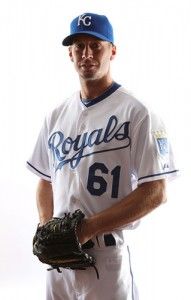 Former Georgia Southern University southpaw Everett Teaford made it back to the major leagues after being called up by the Kansas City Royals on Sunday.

Teaford allowed no runs and one hit against the Cleveland Indians over two thirds of an inning. This was Teaford’s first major league game since September 30, 2012.

After making his MLB debut in 2011, the last three seasons have seen Teaford in a relief role with the Royals, including several spot starts. Teaford also spent some time in Triple-A Omaha this season where he went 3-2 with 2.88 ERA in 23 games.

Outside of his time with the Royals, Teaford has spent parts of the last four seasons with the Royals’ Triple-A affiliate – the Omaha Storm Chasers of the Pacific Coast League.

Teaford was drafted in the 12th round by the Royals in the 2006 MLB First-Year Player Draft out of GSU.

While playing under head coach Rodney Hennon for the Eagles, Teaford put together a collegiate career that warranted major league innings.