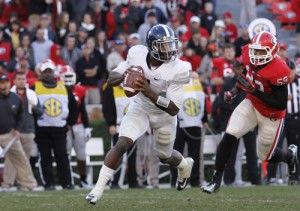 File PhotoGeorgia Southern University quarterback Jerick McKinnon (1) scrambles out of the pocket looking for an open receiver downfield. McKinnon rushed for 1,817 yards and 20 touchdowns in the 2012 season.

Swope and Frye have been selected to The Sports Network 2013 preseason All-Americans.

Swope is the first Eagle running back to rush for 1,000 yards in consecutive seasons since Jermaine Austin in the 2002-03 season. He was also one of four sophomores to appear in the 2012 NCAA Football Championship Subdivision top-25 rushing list and was named first team All-America by College Sports Journal.

Cherry was added to the College Football Performance Awards watch list for the CFPA Punter Award.

Cherry ranks in the top 10 for GSU in career punts and career punting yards while also handling kickoff duties for the Eagles.

The award takes its name after former Jackson State University, Chicago Bears and National Football League Hall of Fame running back Walter Payton and is presented annually to the top offensive player in the Football Championship Subdivision.

McKinnon’s 1,817 rushing yards in 2012 placed him third all time on GSU’s single-season rushing list behind Adrian Peterson with 1,932 yards in 1998 and Jayson Foster with 1,844 yards in 2007. Both Peterson and Foster were Walter Payton Award winners.

“This is truly a blessing, and I am honored that my name is on the list for the Walter Payton Award, but this wouldn’t be even be possible without my teammates,” McKinnon said in a news release. “All the credit for this nomination goes to them.”