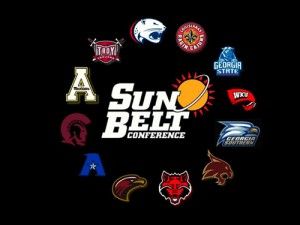 When the Eagles arrive in the Sun Belt Conference beginning with the 2014 season, the competition will be tougher, but expectations will remain the same.

“The fact that we have been a successful program year in and year out is going to help us make this transition. There are certainly expectations when you’re part of a program that’s won six national championships, and hopefully those expectations will stay high,” Monken said.

The Eagles’ notorious triple-option offense that allowed them to run the ball at an average of 399.4 yards per game will be unlike any other offense within the conference.

“I think the uniqueness of it is an advantage. I think it’s an advantage for us just because there are so few teams that run [the triple-option],” Monken said.

“It’s been very effective over the years. It’s been a great offense for us at Georgia Southern, and Jerick McKinnon is the perfect quarterback for that offense,” Monken said. “We’re going to try to establish a run-first philosophy, and hopefully we’ll be able to continue with that philosophy in the Sun Belt.”

The end of the 2012 season was a bitter one for GSU. The Eagles lost in the semifinals of the playoffs for the third straight year and missed out on their last opportunity at a national championship at the Football Championship Subdivision level.

“We got to get better. We didn’t finish the season as we hoped we would. Unfortunately those goals of playing in a national championship aren’t there for us this year, but I hope we’ll have a better team, and we’re going to try to make a run and try to win ‘em all,” Monken said.

The Eagles will kick off the 2013 season against Savannah State University on Aug. 31.