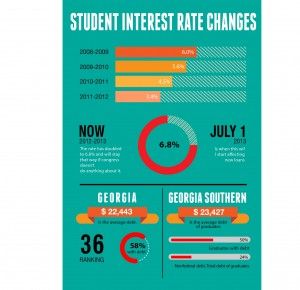 The United States Senate has again failed to make a decision about rising student loan interest rates, voting against a Democratic proposal to freeze the 3.4 percent interest rate for another year.

The current 3.4 percent interest rate on subsidized Stafford loans has doubled to 6.8 percent for the next school year but can change if Congress pursues further discussion of a solution.

“We ask (students) to work harder, and now we ask them to pay more,” Tom Udall, Democratic Senator for New Mexico, said during a Senate session Wednesday.

This same problem also occurred last summer when Congress voted to keep the 3.4 percent interest rate for the 2012-2013 school year.

“Both parties came together and were able to extend the lower interest rate,” Connie Murphey, director of financial aid at Georgia Southern University, said. “This year they were going to try to do the same thing, but the two parties just couldn’t come together on an agreement.”

The deadline for the Senate decision was July 1, but the Senate was in recess at the time and failed to make the decision.

“If (students) take out a new loan for this coming fall and forward, they’re looking at probably paying 20 dollars more per month in loan payments once they graduate and leave school,” Murphey said. “It will increase the amount of money they have to pay back.”

Based on research completed by The White House, over 200,000 Georgia students borrowed Stafford Loans for a total amount of more than $800 million.

“We have at least 65 to 70 percent of our students who have some type of loan,” Murphey said. “There’s a high percentage of students who do borrow money from the federal government, and that’s pretty common at most schools right now.”

The College Cost Reduction and Access Act also specified that interest rates be reset on July 1 for the following school year, leading to the dilemma occurring now in Congress.

Students are being encouraged to use the hashtag “Don’t Double My Rate” on Twitter to express their desire to keep the interest rate set for at least another year, Murphey said.

“They can also contact their local representatives, their congressmen, their senator and voice their opinion that way,” Murphey said. “Let them know that this is not what they want to have happen.”