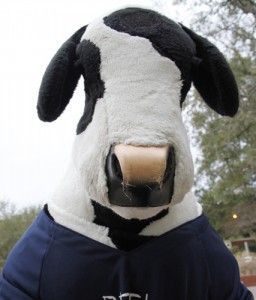 Tomorrow, Georgia Southern University’s Chick-fil-A, along with thousands of other Chick-fil-A’s around the country, will celebrate Cow Appreciation Day by giving away free meals to customers dressed in cow attire.

National Cow Appreciation Day is celebrated the second Friday in July every year at all Chick-fil-A locations in the U.S. The goal is for loyal CFA customers to show their appreciation for cows through choosing to eat chicken.

“Even if you’re just partially dressed, you’ll still get something for free. Mostly we want it to be an opportunity to come out and enjoy Chick-fil-A by having a good time. We’ll have a photographer their and the Chick-fil-A cow will be there throughout the day too,” said General Mananger, Marc Galvin.

The day dedicated to appreciating cows was first officially recognized as a Chick-fil-A holiday on July 15, 2005, when all of CFA’s nearly 2,000 locations participated.

Although GSU’s on-campus Chick-fil-A is number one in the country for sales on college and university campuses and the busiest licensed location, in past years its cow appreciation day enthusiasm has been relativity low.

“We’ve done it before, but we haven’t had as big a turnout as we hoped because faculty and students sometimes assume we’re not doing it or we’re not a ‘real’ Chick-fil-A. But this year we really wanted to change that by getting the word out,” Galvin said.

Even though almost half of the student population will be out of town for the summer, both employees and fellow students are hopeful that cow appreciation day will be a hit.

“They probably won’t get the turn out they would hope for since its summer, but there’s always those people that will think it’s funny to dress up and will do anything for a free sandwich,” Kathleen Brown, a senior communication studies major at GSU, said.

Thomas Hulme, a junior construction management major at GSU and Chick-fil-A employee said “I’ve actually gone and dressed up myself and I’ve seen people in my home town go all out. But even if you don’t and you just wear some Chick-fil-A attire you’ll still get something free like a drink or fry.”