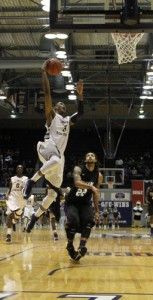 Junior small forward Angel Matias, transferring from Mississippi Gulf Coast Community College, averaged 17.5 points per game and shot 51.4 percent from the floor for the Bulldogs in an injury-shortened sophomore season.

“I expect Angel to make a major impact for our team this year at the small forward position, and he gives perimeter player with good size,” Byington said in a news release.

Freshman power forward Kyle Doyle was signed by Byington out of Buford High School in Atlanta. Doyle finished his senior season with the Region 7-AAA Player of the Year Award and AAA First Team All-State honors.

“We expect him to make a major impact with our team next year. Kyle can play both forward spots and has a lot of qualities that will benefit our team,” Byington said in a news release.

“Torlorf has great size for a combo guard,” Byington said in a news release. “He is almost 6-4 and 190 pounds before stepping onto campus, so he will physically be ready to play right away.”

Curtis Diamond, a junior guard from Lithonia, is a transfer out of Tallahassee Community College. In his two years at TCC, he did not miss a single game. Diamond averaged 12.7 points per game as a sophomore and earned second team All-Panhandle Conference honors.

“Curtis brings needed experience and maturity to our team,” Byington said in a news release. “He can play either guard position and is a great shooter.”

Diamond has two years of eligibility remaining, including the 2013-2014 season.

Senior forward Trent Wiedeman, a transfer from the College of Charleston, rounds out Byington’s 2013-2014 recruiting class.

“Having coached Trent, I know he will give us toughness, rebounding and a post player who can score on the block,” Byington said in a news release.

After the transfer of guard Cleon Roberts to La Salle University in Philadelphia and the firing of head coach Charlton Young, Byington and his crop of talent will bring a new look to GSU men’s basketball.