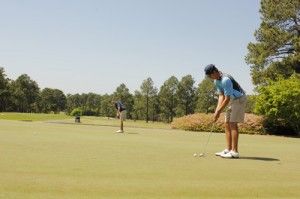 After 36 holes at Hawks Ridge Golf Club in Ball Ground, Ga., on Monday, two Eagles came up short in their hopes of qualifying for the 2013 United States Open Championship.

Rising juniors Scott Wolfes and Matthew Mierzejewski, along with 49 other golfers, were competing to earn two of the three available spots in the U.S. Open from this regional qualifier.

Wolfes, a 2013 PING All-Region honors recipient, shot a 74 and 73 on the par-72 course to finish the day at +3. Shooting +2 on the front nine on Monday, Wolfes shot even on the back nine for an opening-round 73 to start the day.

Wolfes shot a -2 on the front nine of the second round, but uprooted and shot a +5 on the back nine, including a triple bogey on 13 and a double bogey on 18.

Mierzejewski shot an even par on the last nine holes to finish out the round at an overall +2.

Two of the three to qualify are amateurs: University of California’s Michael Kim at -11, and Eastern Carolina University’s Grayson Murray at -9.