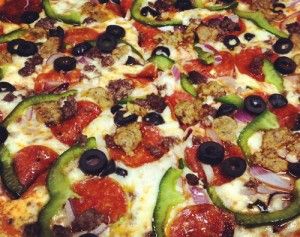 If you’re ready to put down your Little Caesars and Hungry Howie’s pizza for an upgrade, Van Gogh’s is definitely the place for you.

The beer is advertised as a Shock Top clone, but it might as well be that beer. There isn’t too much distinguishing it from Shock Top, but that isn’t such a bad thing. The main difference between the two beers is the aftertaste. The Blue has a spicier aftertaste, not spicy like Tabasco sauce, but like the spices in a pumpkin pie. It’s a great beer for summer, especially on the porch by the lake at Van Gogh’s. The only disappointing thing about this beer is the similarity to Shock Top.  Taking a little more of a risk with the wheat beer could be a future development, but the beer is a solid drink.

Holy hops Batman. This is an IPA on steroids. Imagine your standard IPA, and now make it three times as hoppy. This is the Whose Ale, and it is divisive. If you don’t like hops, by no means should you drink this. If you like hops, give it a shot.  If you love hops, I have found your new favorite beer.

This beer is comparable to Guinness and actually outdoes the world famous drink from Ireland. The texture and coloring is similar to Guinness, but the impressive part comes at the end when the drink leaves you with a coffee aftertaste. Adding that aftertaste to a chocolaty dark beer is a match made in heaven. The real treat with the Creekwater is the option to “Float the Creek.” Floating the Creek entails creating a beer float that has the taste of a Starbucks mocha Frappuccino with the added kick of alcohol.