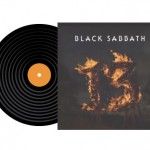 There’s no use in comparing “13,” the band’s 19th album, to earlier classics like “Paranoid,” but it still holds to the dark, heavy sludge of a sound that made them so influential in the first place.

In spite of the seemingly endless lineup changes, the best work Sabbath produced was from the original lineup of Ozzy, guitarist Tony Iommi, bassist Geezer Butler and drummer Bill Ward. Ward is the only one to forego this reunion and has been replaced by Rage Against the Machine and Audioslave drummer Brad Wilk. Even though he may have the same initials, his style is the one glaring weakness in “13.”

Ozzy is in solid form here. No, it’s not his best, but he still has way more power and range than most singers that have reached his age or his level of drug and alcohol consumption. Iommi’s guitar work is loud and heavy and pretty much everything that could be asked of him. The same for Butler’s bass.

The odd man out through most of the album is Brad Wilk. His work with RATM and Audioslave is mostly a precise, funk-filled style. That same precision takes some of the bite out of Sabbath’s sound, and while it doesn’t get in the way of anything, it doesn’t have the same impact as Bill Ward’s heavy-handed looseness.

And what about the songs? Well, they’re good. Nothing on “13” is going to outweigh “Iron Man.” Not even close. But “God is Dead?” and opening track “End of the Beginning” are not only tolerable but genuinely good.

“God is Dead?” trudges along for a good six minutes before an adrenaline-filled turn-it-up guitar riff explodes in. “Zeitgeist” is the requisite hypnotic ballad, made worth it by a jazzy guitar solo to close it.

It’s not close to Black Sabbath’s best work, but for a band almost as old as your parents, it’s pretty good. It also proves that metal doesn’t need rapid-fire double kick drums and cartoonishly fast guitar solos to be, well, metal.