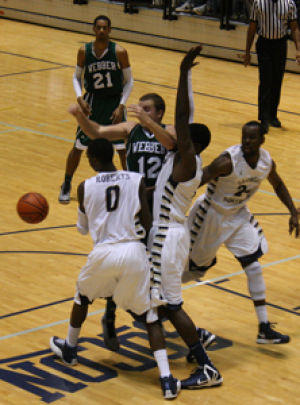 After facing plenty of criticism over the difference between a blocking foul versus a charge, the NCAA has finally amended the rules to distinguish the two, according to a report by NCAA.com.

The NCAA Playing Rules Oversight Panel met on Mondayvia conference call to approve multiple rule changes for men’s and women’s basketball that will take affect beginning with the upcoming 2013-2014 season.

In men’s basketball, there is a revision to the block/charge call. A defensive player is not permitted to move into the path of an offensive player once he has started his upward motion with the ball to attempt a pass or field goal. If the defender is not in legal guarding position by this time, it is a blocking foul.

Before the revision, a defender had to be in a legal guarding position when the offensive player left the floor.

According to the report, the men’s basketball rules committee believes this will give officials more time to determine block/charge calls, allow for more offensive freedom, provide clarity for officials and enhance the balance between offense and defense.

The average amount of points scored in Division I games last season was 67.5, the lowest it has been since the 1981-82 season. Georgia Southern University men’s basketball team averaged 62.2 points per game on 41.9 percent shooting.

In women’s basketball, the 10-second rule in the backcourt will be implemented for the first time since the NCAA began administering women’s championships in the 1981-82 season.

Before the rule was implemented, teams could take as much time off the shot clock as they wanted before crossing the mid-court line. This rule was set in place to increase the tempo of the game and to create more scoring opportunities.

A change in tempo might do GSU some good. As a team, the Lady Eagles ranked No. 10 in the Southern Conference in scoring average with 53.3 points per contest.

Prior to the rule change, NCAA women’s basketball was the only level of basketball in the world that did not practice a 10-second backcourt rule.

A new monitor review rule has also been set in place for both men’s and women’s basketball.

The panel has approved monitor reviews for the last two minutes of regulation and overtime so officials can determine if a shot clock violation was committed and who caused the ball to go out of bounds on a deflection involving two or more players.

Officials may also now use monitors to determine if a flagrant foul has been committed. When the monitor is used in this way, the only options for the officials to call are flagrant 2, flagrant 1 or no foul.