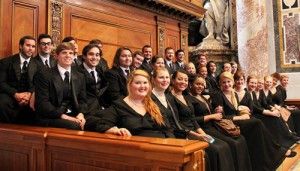 Last night, Georgia Southern University students returned to Statesboro with silverware after a successful run in an international choral competition in Linz, Austria.

The student group, Southern Chorale, competed from May 29 to June 2 in the International Anton Bruckner Choir Competition against amateur and semi-professional choirs from Europe and Asia.

Southern Chorale achieved gold level performance in every category they competed in, taking second place in the Compulsory category, notorious for being the most demanding category.

“We competed against singers much more experienced, refined and practiced than us, and we managed to up nearly all of them. For that I am immensely proud of these students. They blew my mind,” Shannon Jeffreys, Director of choral activities at GSU, said.

The group travelled internationally for the first time as a choir together to compete as the sole American group at the competition.

“Any time you do something for the first time you don’t really know what to expect. I didn’t know how the students were going to respond to an environment like this with so much pressure. They ended up impressing me more than ever,” Jeffreys said.

Along with its second place finish in the compulsory category, Southern Chorale placed fourth in the Sacred category.

“Performing in the Vatican, for me, was the ultimate highlight of the trip. Being able to have the students perform there was incredible,” Carolyn Bryan, tour manager for Southern Chorale and music professor at GSU, said.

Southern Chorale also sang an impromptu performance after a tour at St. Francis cathedral in Italy.

Jeffreys said, “Stuff like this not only is a great experience for all involved, it also brings a lot of recognition to our choral group and university. Every one of them sang their hearts our and I could not possibly be more proud.”