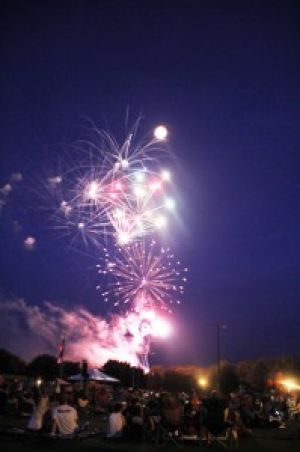 For the 20th consecutive year Mill Creek Park will light up the sky with fireworks as Statesboro celebrates Independence Day with local music, tasty food and a multitude of other activities.

The Statesboro Bulloch County Parks and Recreation Department will host the Firecracker Festival, which will be free for all attendees, on July 4 from 4 – 11 p.m. at Mill Creek Park.

The festival draws upwards of 20,000 attendees annually, making it one of the largest events in Statesboro.

A variety of activities will be available on two fields, including a sub eating contest sponsored by Subway for the first nine people who sign up to compete the day of the event. The winner will receive $500, a daily pass to Splash in the Boro and a prize pack.

The festival also will host bands from around Statesboro to provide more entertainment.

“We have three different bands – we usually use local bands. First, we’ll have a talented, local middle school girl performing, then Wally Brown and this year the last band will be Groove Eclectic,” Kimberly Sharpe, Community Events Supervisor, said.

The bands that are selected to play often come to the department either by word of mouth or through students who send in demo tapes to be selected. Groove Eclectic was selected this year because of its local popularity and many performances in and around Statesboro, Sharpe said.

The FreeStyle Connection, a BMX stunt team that performs around the country and promotes bicyclic safety, the dangers of drugs and tobacco and anti-bullying at their shows, will be performing two sets of 30 minute shows and will include tricks such as 360’s, tail whips, back flips, superman’s, flat lands and more, Jon Dowker FreeStyle Connection owner, said.

“We’ll have some of the best riders in the south east, including Kyle Kelsey and Rob Christianson who was a student at GSU, and was into BMX in elementary school then fell out of it and met up with guys at Statesboro and got back into it and ended up going pro,” said Dowker.

The Parks and Recreation Department wants college students to feel welcome and has worked this year to provide activities they hope will draw young adults, Sharpe said.

Agustina Biggio, a junior fashion design major said,  “Even though it’ll take time for the festival to build a reputation for being an activity for college students, I think if they keep promoting the music and band side of it they’ll build a really good base for years to come and more and more students will go.”