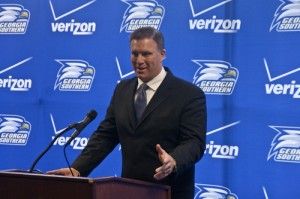 “Because we are such a premier institution in the state of Georgia, we have a lot to offer to a lot of candidates.  What I do is I open up our search on a national level,” Kleinlein said.  “I post our job postings on national websites and I call ADs across the country and ask them if they have anybody that may be interested or if they have seen somebody that may be a good fit.”

Kleinlein is at the forefront of some of the toughest decisions concerning GSU athletics, but one man cannot make such crucial decisions by himself.  Kleinlein has a well-rounded team assisting him.

“We have a search committee that usually consists of myself, a representative from the president’s council and then a faculty member who will sit at that table and hear the candidates as we interview them,” Kleinlein said.

Kleinlein stressed the importance of that search committee and what having them in the room does for him as far as making the final decision in the hiring process.

“It’s kind of a sounding board for me to bounce ideas off of and let me tell them what I’m thinking from an athletic side.  They give me some advice and some guidance in terms of the university side and faculty side, so we can ensure that we’ve got the best fit,” Kleinlein said.

Getting the best fit at head coach can lead a program to new heights, and recent hires like head basketball coach Mark Byington and women’s soccer coach Brian Dunleavy both have Kleinlein’s stamp of approval.

Back in April, Byington came over from Virginia Tech after spending nine seasons with the College of Charleston. Dunleavy, promoted to head coach Tuesday, is home grown having spent the last two years as an assistant under Vanderspiegel.  Kleinlein took into account the circumstances surrounding both programs when making his decision.