GSU seeded No. 7 in SoCon Tourney 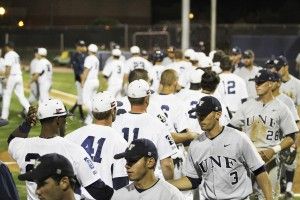 The Georgia Southern University baseball team has another regular season in the books and is looking for a push in the Southern Conference Tournament.

GSU started the season off strong taking two of three from the University of Georgia and beating the University of Florida in extra-inning fashion. The Eagles then had seven consecutive home games against Indiana University, Georgia Institute of Technology and Xavier University. GSU went 3-4 during the home stand, bringing its record to 6-5.

After a loss to Kennesaw State University in the next game, GSU opened up conference play for the 2013 regular season. GSU won nine of its first 10 SoCon games with the only conference loss in that stretch coming from Samford University.

The Eagles ended the regular season losing seven straight games while dropping 19 of their final 23 games, including series sweeps by Clemson University and the College of Charleston.

GSU finished the season with an overall record of 25-30 while going 13-17 in the SoCon.

Junior outfielder Robbie Dodds led the Eagles in 2013 with a .323 batting average. Senior first baseman T.D. Davis led GSU in homers with 12, and sophomore catcher Chase Griffin topped the mark in RBIs with 46.

Senior starting pitcher Justin Hess would lead GSU with a 4.18 ERA, 84 innings pitched and 107 strikeouts, while also amassing four saves during the season.

GSU has entered the SoCon Tournament as the No. 7 seed. After facing CofC, likely opponents for GSU in the tournament include Elon and Furman.

GSU went 2-1 against Elon during the regular season, outscoring the Phoenix 28-17 in the three-game series.  Against Furman, however, the Eagles went 1-2, while being outscored by the Paladins 27-21.