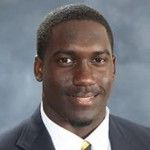 Former Georgia Southern University football player Darius Eubanks was signed as an undrafted free agent by the Minnesota Vikings after the National Football League’s draft this past weekend. This past fall, Eubanks posted a 3.57 GPA and was selected to the Dean’s list while finishing third on the team in tackles with 77.

Are your friends and family treating you any differently now?

Nah, I’m still the same ole guy (I’ve been) for the past 21 years. Just ‘cause I play for another team, that doesn’t change anything. That’s how I’d like it to be.

Describe what you were feeling when you got the call.

I felt kind of relieved just for it to be over with. I know the team that I’m going to play for now and all the hard work I’ve been putting in the past three or four months, I know that has paid off.

Who is the most influential person in your football career that you feel helped make this happen?

That’s a tough one. I guess I’d have to go back to my high school defensive back coach Curtis Williams. He pushed me to not only be an athlete but to be a good student-athlete. He taught me how to be a man, a gentleman, a respectful man. I graduate from Georgia Southern next week, that’s a big honor. I appreciate them (the GSU football coaching staff) as well.

What is like you for you to be graduating and also getting a chance to make an NFL team?

Coming out of high school, going into college, graduating was my main goal. As time went on throughout my (freshman and sophomore) years I kind of made it a goal to also want to play at the next level, and for me to be able to see both of them pass, that’s a great honor. I report to Minnesota this Thursday for the rookie mini-camp, then I return back Sunday and then next weekend I’ll be back in Statesboro graduating. Not only am I proud of that, I know I make my family proud and my hometown is proud as well.

Did you always want to be a football player growing up?

My first choice when I was younger, I don’t know why, but I used to want to be a chef. But till this day I can’t even cook so I don’t even know why I used to. Once my playing days are over with I want to be a coach.

What does it mean to you to be able to step on the field with players like Adrian Peterson?

As a fan of the game, what player do you idolize the most?

Growing up I was a big Brian Dawkins fan. He’s a class act.

What do you need to do to make that 53-man roster?

I got to stay praying always, always. I put all my faith in God. Every man there is going to be as fast as I am every man there is going to be as strong as I am. I feel like if I can learn that playbook as quickly as possible, I feel like that would help me a big amount. One of my main goals is to go up there and stay healthy and just go from there. If I can do those things and be successful at them, then I would have a good chance at making that 53-man roster.