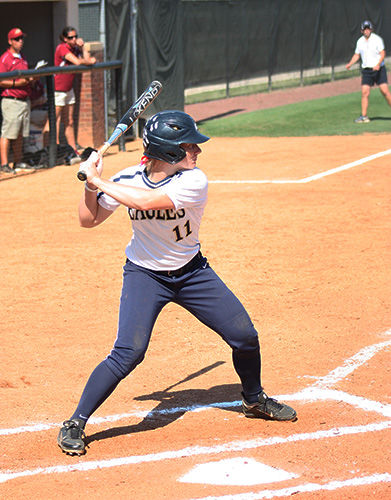 One game is all the Georgia Southern University softball team dropped on its way to winning the Southern Conference Tournament for a second straight year.

GSU made history by going 3-1 in the tournament in Greensboro N.C. held the second weekend in May, which head coach Annie Smith had been preparing her team for all season.

The No. 3 seeded Eagles rode a complete game from junior pitcher Sarah Purvis to a 6-2 victory over the University of Tennessee at Chattanooga on day one.

Day two against Western Carolina University saw Purvis toss her second complete game in as many days, but this time she blanked the opposition as GSU won 6-0.

The road to the SoCon title was not all peaches and cream because when No. 2 seeded College of Charleston met GSU, the Eagles fell 3-2.

CofC was able to get three runs off Purvis, none bigger than one CofC senior second baseman Ashton Jarrett drove in with a walk off single in the bottom of the seventh inning.

The Eagles got some sweet revenge against CofC later that day with a 3-2 walk off victory of their own.

Fourth seeded University of North Carolina at Greensboro was the only thing standing in the way of a second straight SoCon championship.

Junior shortstop Kourtny Thomas would dispatch UNCG in a scene reminiscent of a classic sports movie.  She stepped to the plate with two outs in the bottom of the 11th inning and with one swing of the bat, Thomas shattered the dreams of UNCG.

Her home run to left field combined with 11 scoreless innings from Purvis left the Eagles victorious on their championship perch once again, defeating UNCG 1-0.