The George-Anne Media Group • May 2, 2013 • https://thegeorgeanne.com/13040/sports/eagles-to-close-with-mountaineers/

Eagles to close with Mountaineers 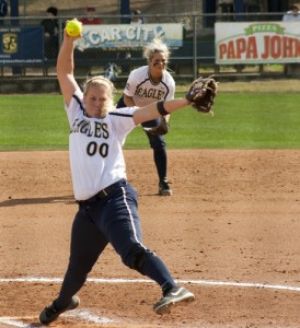 This weekend the Georgia Southern University softball team (23-20) will play its final weekend series of the season against rival Appalachian State University (29-18).

Currently in the Southern Conference, neither of these teams holds the highest ranking, but they do hold very close rankings. GSU is 12-12 in conference play putting the team in the fifth-place ranking, and App. State is 11-11 in conference play putting the Mountaineers in the sixth-place ranking. This series is important to both teams because it is their final weekend series, but it will also determine whether App. State or GSU comes out on top in the SoCon.

Throughout this season, both of these teams have performed similarly against multiple teams in the conference. The Eagles and the Mountaineers swept both Samford University and Elon University and went 1-2 against the University of Tennessee at Chattanooga. But in non-conference play, GSU beat Florida Gulf Coast University and Wichita State University, while App. State lost to both.

Last weekend, the Eagles played the University of North Carolina at Greensboro at home and went 2-1 against UNCG. The Mountaineers were not so fortunate. They played a non-conference doubleheader against Auburn University going 0-2 and scored zero runs against Auburn’s 19 runs for the day.

The Eagles have home field advantage this weekend, which is a positive for them considering the Mountaineers are 16-0 (18-0) at home this season and 11-18 on the road. On the other hand, this weekend is before both schools have their final exams, so these players will be facing stress from another outlet as well.

All of the statistics for both teams are very close in numbers for the season besides the pitching numbers. When compared to the Mountaineers, the Eagles have posted over 100 more strikeouts and have committed fewer errors in the circle.

The Eagles will finish their season at home against the Mountaineers on Saturday at 1 p.m. and 3 p.m. and on Sunday at 1 p.m.