Tying run thrown out at the plate; Eagles win 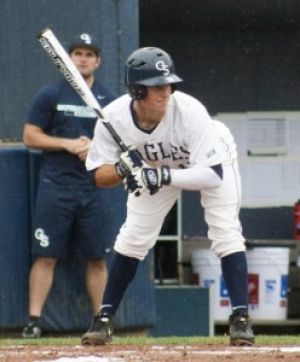 With two outs and a one-run lead in the top of the ninth inning, junior outfielder Robbie Dodds gunned out the tying run at the plate to end the game and earn the Eagles (24-21, 12-12 Southern Conference) the win. The call was close enough to send the CSU head coach flying out of the dugout in protest.

Junior outfielder Zack Hagaman came charging around third base on a slap single to right field from senior catcher Drew Woodall and looked as if he was might have been safe as Dodds’ throw was a just a little high. But as Hagaman slid into home plate, it looked as if he slid too early and never quite made it to the plate. He failed to fully extend his legs through the plate and that was enough time for sophomore catcher Chase Griffin to put the tag on him before he could stretch out farther.

The Buccaneers (17-25, 7-8 Big South Conference) were down 7-1 in the top of the third inning but struck for three runs and then two more in the top of the ninth to draw within a run before the game-ending play. CSU actually out-hit the Eagles in the game 16-7 but was not able to take a lead.

Griffin led the charge offensively with three RBIs on one for two, hitting with a walk. But it was junior designated hitter Garren Palmer who provided Griffin the opportunity to knock in some runs by doing his job as the leadoff man, getting on base. Palmer was three for four with an RBI as well.

The Eagles used four pitchers last night to piece together the victory. Freshman Evan Challenger started the game before sophomores Heath Durand and Sam Howard as well as senior Kyle Rowe came on to seal the deal. Durand earned his first win on the year.

After splitting the two games this week, GSU is three games above .500 with only 10 games remaining.

Sitting in fifth place on a 12-12 conference record and only six SoCon games left, GSU will need to win the series if it wants to have a shot at sliding up a spot or two in the rankings by the end of the year.

Furman is a team that doesn’t really specialize in one skill, but also doesn’t do any specific skill poorly. The team ranks sixth out of 11 in both team batting average and ERA and fifth out of 11 in fielding percentage.