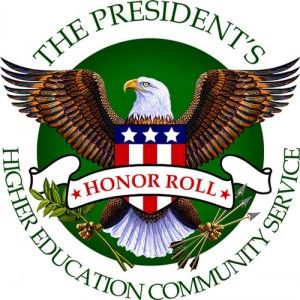 “This award recognizes the dedication of our students, faculty and staff to invest their lives in this community,” Dr. Todd Deal, director of the Office of Student Leadership and Civic Engagement, said in a news release.

“Our students definitely have a heart for investing their lives through service. I can say that I have never seen a university student body with such a dedication to service. I think it reflects the ethos of our region,” Deal said in a news release.

This is the first time GSU has applied for and been recognized with the award, Wendy Denton, assistant director for Service Learning, said.

“There is an application process that all universities and colleges are welcome to pursue. They have a certain set of pretty hard questions and data that you turn in and you tell stories about three different example programs that your university participates in,” Denton said.

“The tricky part was collecting the data. We didn’t collect anything close to what the university actually produces. We collected what we could and we still won so that’s cool,” Denton said.

As a part of the application, GSU reported service by its pre-service teachers and nursing students, as well as the community service efforts coordinated through the OSLCE. However, the many hours of service by the Greek organizations were not included, according to a news release.

“The Community Liaisons program is a program with the goal of bridging the gap between Georgia Southern University and the Statesboro community by having student leaders placed in agencies around the Statesboro community to recruit volunteers for different programs and events and also to implement special projects and programs,” Ryan Keesee, supervisor of Community Liaison program, said.

Some of the agencies included are the Boys and Girls Club, Westwood Nursing Home and Bulloch County REC Department, Keesee said.

The Honor Roll recipients were announced at the American Council on Education’s 95th Annual Meeting “Leading Change” on March 4 in Washington, D.C., according to the NationalService.gov.

Denton said, “When a university is as large as ours it’s nice to justify what a huge impact we have. We hate to be a best-kept secret.”

For the full story, pick up Thursday’s issue of The George-Anne.