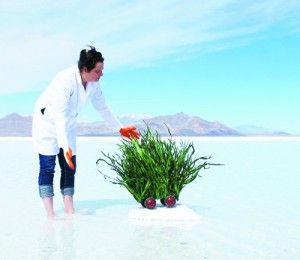 PlantBot Genetics Inc. will unleash the EcoBot, a plant robot, under the rotunda tomorrow as the company begins promoting discussion on genetically modified food sources.

Students have the opportunity to operate remote controlled EcoBots and discuss GMOs at the rotunda from 11:30 a.m. – 12:30 p.m.

PlantBot Genetics is an organization striving to raise awareness on transparency and sustainability in the food industry. The event is free and open to the public.

An artist talk was held yesterday to begin the discussion on GSU’s campus of PlantBot with Wendy DesChene, co-founder of PlantBot Genetics and art professor at Auburn University, said. She spoke to art students on how to create and sculpt PalntBots.

“We’re using humor as a backdoor to promote important discussions on what goes into our food and where it’s coming from. We want to know what we’re eating,” Schmuki said.

All of the EcoBots at the demonstration are made in collaboration with ceramics students at GSU.

“College students are the perfect audience for discussions like these. They’re the younger generation. They have so much time to fix problems like these,” Erick Clark, student EcoBot creator and ceramics graduate student at GSU, said.

The event is part of the Monsantra project, based off of the Monsanto Company, the world’s largest producer of genetically modified seed.

“Consumers are really kept in the dark about genetics and food by the large corporations that use these techniques to increase crop yield,” DesChene said.

“We have no clue about the long-term effects of genetically modifying our food. We don’t know what else it could be affecting. We have no clue what doing any of this will do to us in a few years. I think most people would protest this if they knew it was happening,” DesChene said.

Foods with GMOs in them are not required to put a notification of the presence of GMOs on the labeling. This makes it impossible for consumers to know what is in the food, Schmuki said.

GMOs are organisms created through gene splicing and biotechnology            with the purpose of mass production and disease resistance.

“When I lived in Canada I heard about Monsanto suing local farmers because their genetically engineered seed had been blown from their farms in the states to small farms in Canada. That’s when I first heard about GMOs,” DesChene said.

The FDA does not require safety regulations, evaluations or labeling for GMO products.

DesChene said, “Everyone is wondering why all these bad things are happening to our food chain. The truth is a lot of it might be linked to GMOs and distribution inefficiency. Why do I have to buy tomatoes grown in Canada at a store in the Southeast?”