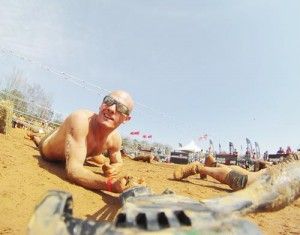 The Spartan Death Race is tough and boasts its difficulty with confidence. Out of last year’s 300 competitors, only 10 percent actually finished the race.

The race is an intense test of strength and both physical and mental endurance. Strategy and working smartly is key to being competitive in this event, Turnbull said.

The race is typically themed, and this year’s theme is “The Year of the Gambler,” but the competitors do not have any clue what that means for them until the beginning of the race. There are almost no rules in the Death Race, and the competitors have no knowledge of the events or missions that they will be participating in ahead of the race.

Turnbull competed in last year’s Spartan Death Race but was unable to finish. This year he is in the hunt for redemption. Last year’s grueling event kept the competitors who were able to remain in the race on the run for 60 hours for a distance over 100 miles.

Turnbull’s original plan was to begin training for the race in January, but was forced to take it slow due to an injury. He has since ramped up his workout routine and has spent four vigorous weeks training for the race. He continues his training with running and various cardio exercises, lifting weights, regulating protein intake and eating healthy, although a weakness to peanut M&M’s can make this challenging at times.

Turnbull recently competed in the S.E.R.E Assault Challenge and was the unofficial winner of that event. He used the event to help him train for the coming Death Race in Vermont.

Turnbull graduated in 2009 with a degree in mechanical engineering. He is currently a graduate student studying applied engineering and mechatronics. Turnbull is in his final year of graduate school at GSU and is set to walk in May and will defend his thesis in June on a Monday and arrive in Vermont on a Friday to compete in the Spartan Death Race.

“I am competing again because I want to finish what I started last year by becoming a part of the elite ten percent finisher’s list, and I am not leaving Vermont this time without a finisher’s skull. Period,” Turnbull said.

This year, out of a love for the challenge, Turnbull is returning to the race with better strategy and tactics, better gear and the confidence of having done it before.