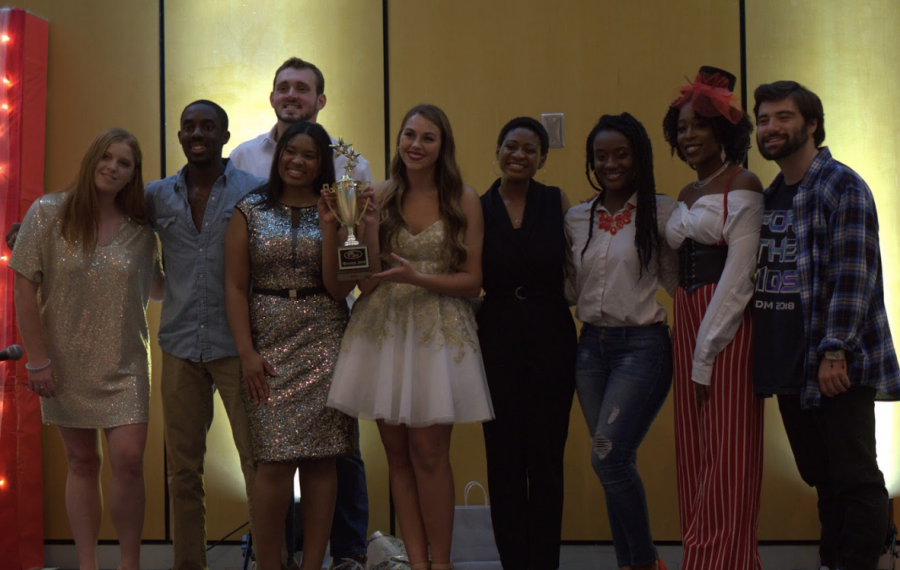 11 students competed at GSU Idol on Thursday, resulting in a tie.

Livia Lovett and Sharnae Pegues tied for first place in the singing competition with Jacob Barefield winning people’s choice. 11 students participated in the first round and the judges chose their winners after the third.

Lovett sang If I Ain’t Got You by Alicia Keys. She referred to Thursday as “The best night,” in an instagram post on Friday.

Lovett has music online titled Look up Child, a cover of a song by Lauren Daigle, a female Christian singer and songwriter. Lovett believes this song is appropriate for the season of growth that she is in, according to an Instagram post on Aug. 10.

“Can’t wait to see what God has in store for me and I hope this song serves as a reminder that the best is yet to come,” Lovett wrote in the Instagram post.

Pegues, a junior middle grades education major, chose to sing A Million Dreams and From Now On, both from The Greatest Showman, for her first GSU Idol competition. Pegues wanted to encourage the audience through her performances to always strive to remain humble and always chase their dreams, just as she plans to.

“A Million Dreams makes me think about my dream in life to own my own school for young girls. So, while singing this song, I became encouraged to keep striving toward my dream,” Pegues said. “I chose From Now On because of the impact of the message it carries. It reminds people to always remember where they came from and hold on to those who love you no matter how successful you become – don’t lose sight of your character as you rise to the top.”

With a stomach full of butterflies, Pegues was overjoyed to have tied with Lovett. Winning GSU Idol was not possible without God and support from her family and friends.

“I know that I can do all things through Christ who strengthens me so, I knew if I asked God to be with me and help me through idol He would always do so,” Pegues wrote in an email. “My faith in Him is undeniable and the result of me winning proves just how awesome God really is!”

Pegues is a transfer student from South Georgia State College and is a Douglas native.

Barefield, a senior political science major, debuted his voice with My Way by Frank Sinatra, a performance dedicated to his late father, Mickey. Before GSU Idol, Barefield had only sang in front of his two roommates.

“I felt that finally building up the courage to perform and step out of my comfort zone would have made him proud,” Barefield said.

Winning people’s choice caught him off guard, but Barefield was excited to hear his name called.