Cougars down Eagles in SoCon tournament 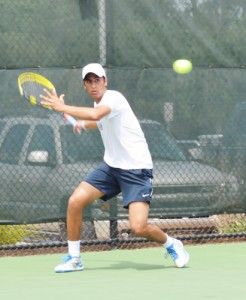 The Georgia Southern University men’s tennis team ended its season Friday after coming up short against the College of Charleston 1-4 in the quarterfinals of the 2013 Southern Conference tournament.

The sixth-seeded Eagles’ opening round opponent was the 11th-seed The Citadel, which GSU swept in the regular season 7-0. GSU started the tournament by sweeping The Citadel for a second time on Thursday, 4-0.

Junior Oliver Webb and senior Matthijs Verdam started doubles play with an 8-1 victory in the No. 1 doubles position.

The wins kept coming for the Eagles after the duo of junior Marco Osorio and freshman Rayane Djouad defeated their opponents 8-4, clinching the doubles point for GSU.

The momentum carried over to the singles portion of the match for the Eagles after they won three consecutive matches to advance to the quarterfinals.

Sophomore Albert Codina Sala handled his opponent 6-0, 6-1, and freshman Rafael Racy quickly followed with a 6-2, 6-2 win, which clinched the match for the Eagles.

Head coach Nick Zieziula said in a news release that he was proud of his team’s effort and efficiency.

“We played a very good match today. We talked to the guys today about being efficient on the court and I think we did that to a tee,” Zieziula said.

After the 4-0 win, the Eagles advanced to the quarterfinals to face the third-seeded CofC on Friday.

The quarterfinals were not kind to GSU as the Cougars ended the Eagles’ hopes of a conference championship with a 1-4 win.

The win by Webb would end up being the only point GSU received on the day. The Cougars would go on to win the next three singles matches to give them a 3-1 lead.

Sala was defeated 2-6, 0-6 in the No. 2 singles spot, moving the Cougars closer to the semifinals.

Reality set in after Verdam was defeated 4-6, 5-7 in an-all-or-nothing match. The loss clinched the win for CofC.

The Eagles ended their season with an 11-9 record, which is much improved from last year’s 3-20 season.