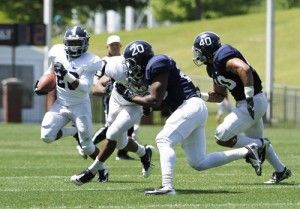 The annual Blue and White spring football game saw the blue team pull out a 14-12 win over the white team with some of the most recognizable Eagles sidelined.

With rising senior starting quarterback Jerick McKinnon and rising junior running back Dominique Swope out, the offense looked a bit different from the bruising triple option attack GSU rode to the semi-finals of the FCS playoffs last year.

“We got in the shotgun a lot more because we didn’t want our quarterbacks to get hit every single play.  We were down to one b-back at one point, and when you’re under center he is going to get tackled every play whether he’s got the ball or not,” head football coach Jeff Monken said.

The laundry list of injuries that have hit the team this spring had Monken looking further down the depth chart than normal for this year’s game.

“You can go down the list, and there are a lot of guys we had to try and play that really aren’t in the top two or three at their position, and that is going to be frustrating.  I just wish we were executing a little bit better on both sides,” Monken said.

Sloppy play and injuries were not enough to keep some younger players from ceasing their opportunity to make an impact on the field.

Redshirt freshman quarterback Vegas Harley connected on a couple of curl routes on the way to completing 6-11 passes.

“I personally feel like I need to work on every phase of my game. Perfection is always out of reach, but on the way we achieve greatness,” Harley said.

The defense was also noticeably different with former starters J.J. Wilcox and Brent Russell no longer leading the charge.

Rising senior linebacker Kyle Oehlbeck finished the game with eight tackles and put his signature on the game with a big hit on special teams.  He could help fill the leadership void that losing the two best players on the defense creates.

“It’s always the obligation of the seniors to take on that leadership role,” Oehlbeck said.

Circumstances forced Monken to try a lot of different things on offense in the spring game, but the triple option will remain his team’s bread and butter.

Monken said, “The advantage is being able to run the option because it’s just not something that everybody does and everybody defends.  That’s my philosophy. Other people have got different philosophies, but that’s mine and as long as I’m the coach here that will be our philosophy.”