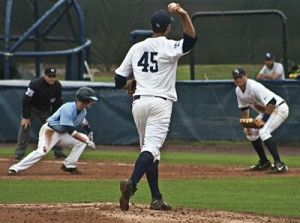 For the third consecutive weekend the Georgia Southern University baseball team lost a Southern Conference series as The Citadel swept the Eagles, nearly shutting them out in all three games.

The Eagles have dropped seven of their last 10 games with all losses coming from teams with records worse than the Eagles. The Bulldogs managed to hold GSU scoreless for 26 consecutive innings out of a possible 29. The Eagles did not put a run on the board until the seventh inning of game three.

The Bulldogs’ first basemen Calvin Orth was a problem for the Eagles the entire series beginning in game one.

In the first game of the series GSU fell 11-0, and in that game Orth had two homeruns including an eighth-inning grand slam capping off a five-run fifth inning.

Sophomore pitcher Sam Howard (5-4) picked up the loss as he went six innings giving up six runs, five earned, on 11 hits while striking out three.

Game two was a pitcher’s duel that resulted in a 1-0 GSU loss after 11 innings of play. Senior pitcher Justin Hess pitched for a career-high, nine innings scattering four hits and striking out nine batters.

In game three, the Eagles were outpitched and outhit in their 8-2 loss. The Bulldogs recorded nine hits in comparison to five hits for GSU.

GSU was in desperate need of offense in this series, and Hennon wants his team to make adjustments going forward.

“Bottom line is we got a lot of adjustments to make, especially offensively. We’re struggling and we got some guys that are just going to have to simply make some adjustments and step up and get it done,” Hennon said.

The Eagles will get their chance to answer adversity and adjust against Mercer University today. First pitch is set for 6 p.m.