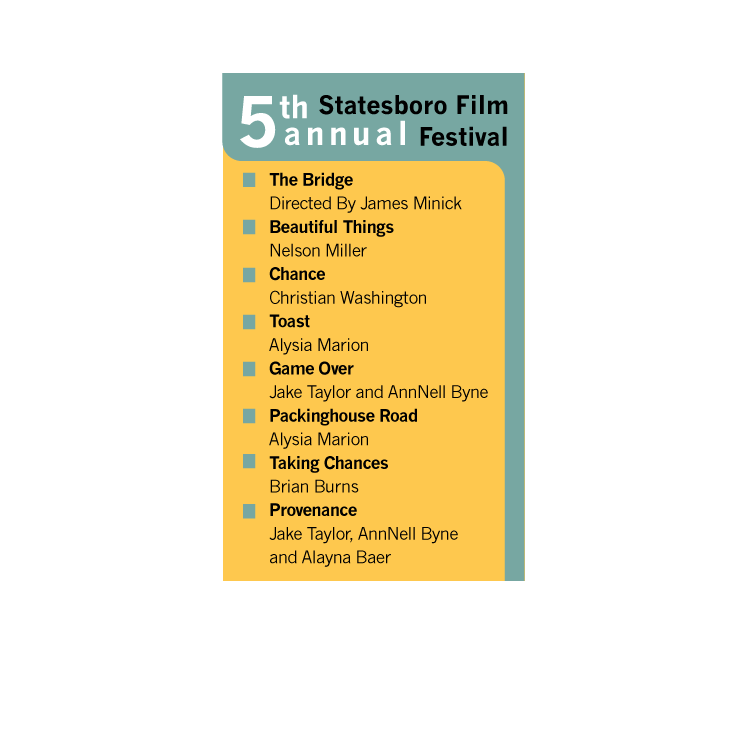 Local filmmakers will see their own work on the silver screen at the upcoming 5th Annual Statesboro Film Festival on April 11 at the Averitt Center for the Arts.

The festival will showcase a series of short films that will compete for six different awards including a grand prize of “Best Picture.”

“The formation of the film festival was conceived on the idea that there was a lot of talent in the community with nowhere locally for that talent to get exposure,” Matthew Bankhead, video producer and festival coordinator, said.

Though an emphasis is put on the support of local filmmakers, anyone was welcome to submit an entry from any genre that was no longer than eight minutes. Ten films were featured last year, Bankhead said.

These films will be played for viewers at 7 p.m. following a reception catered by Millhouse Steakhouse that starts at 6:30 p.m. Tickets are $5 and can be purchased at the Averitt Center box office.

“We had a great turnout last year from the community, and everyone had a great time. Millhouse Steakhouse catered the event last year with some delicious food and will once again be catering the festival this year,” Bankhead said.

Prior to the festival, viewers may go online and vote for their favorite short film at statesborofilmfestival.com and the film with the highest vote will receive the Viewer’s Choice Award at the festival, Bankhead said.

A panel of judges selects the other five awards, which include Best Picture, Best Director, Best Cinematography, Best Editing and Rising Artist.

The Rising Artist award will be given for the first time this year to the best filmmaker under 18 years old.

This award was created so young filmmakers who did not have the same resources as college students or others professional participants could still compete, Bankhead said.

Prizes will be given to the winners at the end of the festival.

Bankhead said, “We had over ten submissions last year and over a hundred people attended. We hope that it will continue to grow in the years to follow.”