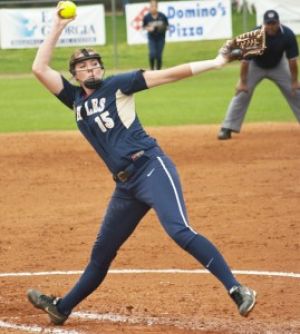 Georgia Southern University’s softball team found success at home in its weekend series going 3-0 against Samford University in the series.

“We’ve done a great job defensively at practice, driving the ball great, hitting great all week at practice. I think we just came out focused. We are determined right now and I like that,” head coach Annie Smith said.

In both of the games on Saturday, the Eagles started out strong and kept their momentum going throughout the entire doubleheader. In the first game of the doubleheader, GSU held the Bulldogs to no runs, and junior pitcher Sarah Purvis threw her second one-hitter game at home of the conference-play season.

The Eagles were performing with excellence behind the plate, defeating the Bulldogs 6-0. In the second inning, several singles and sacrifice flies led to three runs added to the Eagles’ two-run lead, bringing GSU to a 5-0 lead.

Sophomore Kaitlyn Johnson contributed to this performance with two runs, two hits and one RBI in three times at bat. Her success did not end there as Johnson got two more hits and one more RBI in the second game of the doubleheader.

The Eagles took down the Bulldogs 4-2 in their second game, taking an early lead in the first inning. Two walks and an error by the Bulldogs allowed junior infielder/outfielder Shelby Morrill’s hit to right field to bring in two runs, and later she also was able to score a run.

Sophomore pitcher Shelby Scott stepped up for the Bulldogs in the sixth inning and got a solo home run to cut their deficit down to two runs. But junior pitcher Allie Miles for the Eagles immediately shut down Samford’s momentum by retiring the next six batters and closing the game for a victory.

Sophomore pitcher Brooke Red led the Eagles by pitching a two-hit shutout in third and final game of the series. The beginning of the game was not comparable to the previous two, considering the Eagles did not score a run until the sixth inning.

Senior infielder Tabby Douberley hit a ball into right field that drove in junior infielder Kourtny Thomas after she doubled earlier. This run was the only one of the game, but was Douberley’s 30th RBI of the season.

“You can always do things better, but I think we are doing a nice job. We made a lot of nice defensive plays, and obviously you want to score twenty runs a game, but you know we can’t always do that. So just keep having good at bats and hopefully everything falls the way we want it to,” Smith said.

The Eagles will be back on the road to play a weekend series against Western Carolina University on Saturday, April 20 at 1 p.m. and 3 p.m. and on Sunday, April 21 at 1 p.m.