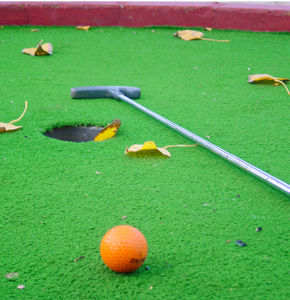 The Mini-Masters event is a putt-putt tournament where two-person teams or individuals can compete for winning prizes, including a $50 gift card to R.J. Pope and R.J. Pope t-shirts. The top prize is a football signed by head coach Jeff Monken.

“We decided to make this happen because of how excited everyone, especially in the state of Georgia, gets about the Masters as well as the constant need for more resources for Joseph’s Home for Boys,” Josh Archer, freshman public relations officer, said in the press release.

All proceeds raised from Mini-Masters will be donated directly to Joseph’s Home for Boys, ATO’s local philanthropy.

Joseph’s Home for Boys is a group home in Statesboro that houses children ages 6 to 21 and provides them with a long-term supportive environment.

“This isn’t the first time we’ve supported Joseph’s. We take the kids out to events here like basketball games and we play flag football with them. We just really want to support them however we can,” Andrew Robertson, senior ATO president, said.

“We wanted a have a fun way to support our community and in a way that benefits everyone,” Archer said.

The event is open to all Georgia Southern students for $5 a ticket. Pizza from Hungry Howies is included in the ticket price.

“I think Mini-Masters is a good idea because it can attract a bigger diversity of people because, lets be honest, everybody loves putt-putt,” Ryan Neimier, junior ATO member, said.

Archer said, “Tickets are going fast. We expect a big turn out.”