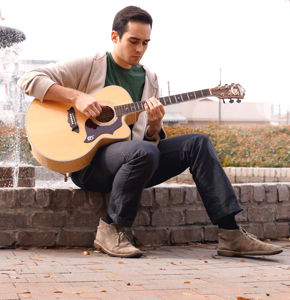 With a background in acoustic music combined with a love for soul and R&B, Georgia Southern University student Jake Manahan is capable of manifesting an accessible yet creative sound.

Manahan, sophomore foreign language major, describes his music as “relatable and organic.” He has performed in many of the town’s more popular venues including Loco’s Grill & Pub, Dingus McGee’s and The Daily Grind.

Manahan exhibits his soulful acoustic pop on his first full-length album “Note to Self.” The album was recorded last summer in Tennessee with band mates Patrick Warren and Kyle Law, and was released today.

Q: The album is called “Note to Self,” what does that mean?

Q: There’s a song on the album called “In Line at the ATM.” Is that one of those experiences?

It was actually at the ATM in Russell Union. There was this girl I’d been attracted to for a while, and I finally decided to talk to her. The song sort of developed from that. When I write, it has to be something personal. All your material as a songwriter comes from experiences like that. I love building the scene like that.

Q: What is it about your music that makes it organic? What is your style?

I grab a lot of stuff from other influences. I’m big into soul and R&B. John Mayer has influenced me a lot too. At the same time, I have those DeAngelo-type influences. I like artists who have conquered the essence of groove and vibe. I have the love for that, as well as a love for pop. I like when stuff is palatable to people and they can really relate. I love those pop hooks, but I love the intricacies of the other stuff, so when I’m looking to develop my style I’m continuously trying to evolve. My style is really just a compilation of the music that I enjoy listening to.

Q: What makes you want to be a musician?

For me, it’s the perfect medium for expressing ideas and expressing experiences that you want to share with people. Music is something everybody can relate to. I do it because I feel like I can really share something that people can relate to. I can provide something that can make them connect with themselves. They can put themselves in the music and say: “Well that’s an experience I’ve had before. He’s just a regular guy.” That’s so special to me, and it’s beautiful that I can be a part of something like that.