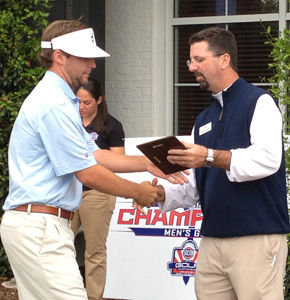 Sophomore Scott Wolfes was named the Southern Conference Golfer of the Year at the SoCon Championship on Tuesday.

The award should come as no surprise as Wolfes placed in the top 10 in seven tournaments with a first or second place finish five times and finished the season off collecting two tournament victories.

Along with Golfer of the Year, Wolfes was named to the first-team all-conference.

At the SoCon Championships this week, Wolfes went from shooting a season-worst 81 on the first day to an impressive 18th overall finish by the end of the tournament.

The 6’1” business marketing major picked up the clubs and started playing at the age of 10. Now he is looking to broadcast his talent on the national level as the Eagles are hoping for a bid to the NCAA Regional Tournament.