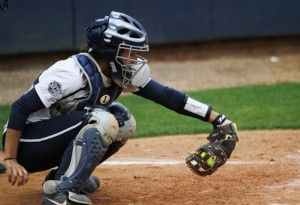 The Georgia Southern University softball team found some sixth inning magic against the University of North Carolina at Greensboro to take two of three at home over the weekend.

GSU pushed its Southern Conference record to 12-8 and now sits a full game ahead of UNCG for third place as the SoCon tournament approaches.

Things got underway on Saturday then GSU took the opening game of the series 5-2.  The Eagles found themselves tied at 2-2 going into the sixth inning thanks to two runners batted in from UNCG junior catcher Katelyn Bedwell.

UNCG gift-wrapped a scoring opportunity for the Eagles with a third base error to start the inning and a first base error to put two runners in scoring position.

Tarashuk would go on to score on a sacrifice fly by freshman catcher A.J. Hamilton to make the final score 5-2.

“Some things go your way and sometimes they don’t, so it was important to get that first win.  We played well, and I was proud of how we played this game,” head coach Annie Smith said.

Game three saw GSU recapture the sixth inning magic that propelled the team to victory in game one to knock off UNCG 7-3.

The Eagles were down 3-2 going into the bottom of the sixth inning, and they had managed just three hits at that point in the game.

Sophomore pitcher Brooke Red would pitch wire-to-wire in game two, which went to extra innings.  She gave up just two earned runs in eight innings of work, but the Eagles could only score once.

The game was knotted at 1-1 after the third inning and would stay that way until UNCG junior left fielder Aisha Figueroa decided to take over in the top of the eighth.

Figueroa scored both UNCG runs, and her single followed by a stolen base put her teammate, freshman catcher Lindsay Thomas, in position to win the game with her RBI single to left field.

The Eagles could only muster four hits between three players because UNCG sophomore pitcher Erica Navarette had it working to the tune of seven strikeouts in eight innings.

“I don’t know if there is a lot we could do different.  Obviously get more hits, but they would have probably liked to have got more hits too.  Sometimes you get it when you need to, sometimes you don’t,” Smith said.

Tarashuk said, “We always have it in the back of our minds that everybody is out to get us.  We just have to keep playing our game because they are going to be after us, they don’t want to lose that number one seed.”