Charlie and the Foxtrotsâ€™ folk-pop style shines on debut 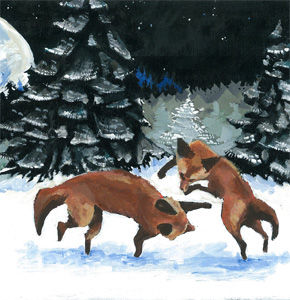 Statesboro-born folk-pop group Charlie and the Foxtrots are currently in the process of mastering and promoting their debut album, “The Evergreen E.P.,” which is set to release on iTunes in mid-May.

The Foxtrots’ ability to mesh various elements of pop and folk is the band’s strong suit. Vocalist Chas Wilson’s innocent, cutting voice settles comfortably into a warm wrapping of acoustic instruments ranging from mandolin to banjo, giving the album a modern folk flavor that is both uniquely satisfying and very accessible to the listener.

The driving title track “Evergreen Philosophy” highlights the band’s more folky, hoedown-oriented side. A quick tempo allows the bass to set a groove that is difficult to resist. That groove continues into the soaring chorus as Wilson sings: “I will leave this world behind me/And I won’t sigh for the emptiness inside of me.” The bridge features percussive snaps and claps, which add even more catchiness to an already infectious song.

Perhaps the most interesting song on the album is “Meeting the Stone.” On this darker, more mature ballad, the band demonstrates the flexibility of its instruments while stretching the constraints of its genre.

The only downfall of the album is also one of its greatest strengths. Charlie and the Foxtrots are, relatively speaking, a young band. There are times where the spritely, youthful sound fits perfectly, and there are times when it leaves you desiring to know what the band will sound like in five years.  The light, jumpy vibe of “Thumping” is a good example. While the song is catchy, its musical innocence can be overbearing at times.

Members of Charlie and the Foxtrots traveled to Nashville to meet with their band mates the weekend of St. Patrick’s Day this year. The band recorded “The Evergreen E.P.” in four days at Shadow Lane Studios with producer Phillip Wolf and is currently preparing for their summer tour of the east coast.

“The Evergreen E.P.” is a well thought out album full of detailed nuances and an undeniably raw and contagious folk-pop sound. The group’s vocal harmonies are tight, and the album’s lyrics reflect the growing process The Foxtrots are going through as individuals. It’s good.